Groundwork Jacksonville (GWJax) announced exciting progress in its mission to build the Emerald Trail within the next 10 years during a news conference at City Hall Aug. 26, including new corporate ambassadors, major donors and a presentation to Mayor Lenny Curry representing the group’s first commitment to the design of the Emerald Trail Model Project. The group closed the conference with an announcement of a challenge grant that will take the organization to its first $1 million in Trail funding.

Kay Ehas, GWJax CEO, shared plans for the nationally renowned urban trail with the crowd of supporters and media. According to Ehas, “The Emerald Trail must be a project that benefits our entire community—especially the residents and businesses in the neighborhoods the trail will go through, along with all Jacksonville residents, visitors and tourists.” 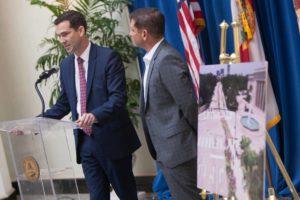 The project represents a partnership between GWJax, the City of Jacksonville, and the philanthropic and business communities. To that end, Ehas announced co-Trail Champions David Miller and Brian Wolfburg, two respected business leaders who will serve as ambassadors for the project in the community. According to Ehas, “Both David and Brian truly believe in this project and the positive impact it will have on the entire community.”

David Miller is co-founder and Executive Chairman of Brightway Insurance, one of the largest property and casualty insurance agencies in the country with annual sales over $600 million.  Miller is passionate about creating positive outcomes that have positive results for multiple stakeholders.  He is an ongoing supporter of the United Way, including previously serving on the Board of Directors.  As an advocate for the LGBT community, Miller was a lead investor in JASMYN’s year-long 25th anniversary.

He currently serves on the Senior Advisory Council for OneJax, and recently invested in the Sandy Miller Metrotown Institute, which brings youth from all over the city together to build character and develop future leaders. The program now bears the name of his mother who was instrumental in developing the program nearly 30 years ago.

According to Miller, “I believe in this project, not only for what we are doing, but just as importantly, for how we are doing it. We will be intentional about involving all sectors of the community, to build a Trail that connects many of our underserved neighborhoods and uplifts our entire community.”

Brian Wolfburg currently serves as the President/CEO of VyStar Credit Union, the 15th largest credit union in the country and second largest in Florida. Prior to joining VyStar in October 2017, Wolfburg was the COO for Alaska USA Federal Credit Union, based in Anchorage, Alaska.

Wolfburg believes in being very involved in the communities in which he lives and works. Since moving his family to Jacksonville, he has joined the boards of and or taken leadership positions in the Jacksonville Chamber, JAXUSA’s Military Affairs Committee, the NASCUS Credit Union Advisory Board and FIS Credit Union Advisory Board. Wolfburg said, “What excites me about the Trail is the activation of the space and integration of art, nature and recreation. This project will be transformational for downtown.” 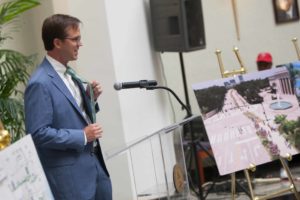 Ehas also introduced Michael Pajcic, of the Law Firm Pajcic & Pajcic. Michael and his father Steve are avid cyclists who see the need for the Emerald Trail. Michael, his wife Katy DeBriere, Steve and wife Anne along with their law firm Pajcic & Pajcic, were recognized for making the first multi-year financial commitment to the Emerald Trail of $50,000 per year for the next 4 years.

According to Pajcic, “My dad and I ride our bikes to work almost every day, and when he isn’t on his bike, he is in his kayak. When we heard about the plans for the Emerald Trail project, we did not hesitate to get involved. Having safe, designated bicycle and walking paths throughout the core of the city is something that will benefit and transform our entire community – from Riverside/Avondale, where we live now, to Woodstock Park, where he grew up. We will do what we can to help make this a reality for all of us and for future generations.” 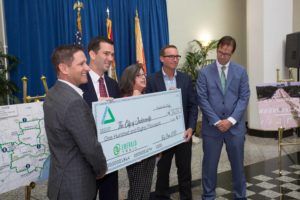 The group presented a ceremonial check to Mayor Lenny Curry for $180,000 representing GWJax’s portion of the first 1.3 mile Model Project design costs. Groundwork has an agreement with the City to manage design and permitting of the various segments of the Trail and share in the cost. Called the LaVilla Link, the Model Project will connect the S-Line to Brooklyn, through LaVilla. POND & Company has been selected and will begin designing this first segment next month. Construction will take a year to complete and is expected to begin in fall of 2020.

In his remarks Mayor Curry said, “I’m grateful that we are here today highlighting many of the great things happening in Jacksonville and this is one of the big ones. [The Emerald Trail] is going to be a catalyst and a big change not only for downtown but also for the entire city. Thank you and let’s keep doing good things together for the quality of life of our citizens.”

Ehas closed the conference announcing GWJax’s first challenge grant. “I am thrilled to announce a $250,000, 1 to 3 challenge grant, from the Delores Barr Weaver Fund at The Community Foundation for Northeast Florida. Thanks to the generous donors we recognized today, we are already more than halfway to meeting her challenge and raising our first $1,000,000 for the Trail!” In addition to the Pajcic family, David Miller contributed $100,000 as the first matching grant to the project. Likewise Vystar, the largest contributor to date, committed $275,000 for the Emerald Trail and McCoys Creek restoration.