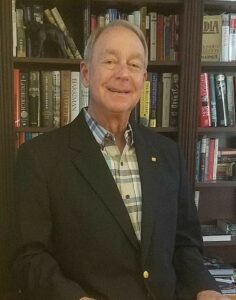 Retired from a 41-year career in global transportation and logistics with Sea-Land and CSX, Larry Roberts now devotes much of his time to transportation issues on a more personal level through JTC Running and other volunteer efforts.

Soon after moving to Jacksonville in 1992, Larry joined the Board of JTC Running (JTC), the nonprofit responsible for several local runs including the Gate River Run — the largest 15K race in the country — which brings tremendous economic impact and visibility to Jacksonville.  For the last nine years, Larry has served as the Board president.

Each year, JTC contributes more than $100,000 to philanthropic initiatives including scholarships to summer running camps for high school students, a series of free track meets, and contributions to other worthy causes in the area. Last year JTC donated $50,000 to GWJax for the development of the Emerald Trail Master Plan.

In addition, Larry volunteers on two committees – Bicycle Pedestrian Advisory Committee (BPAC) and City of Jacksonville’s Context Sensitive Streets Standards Committee (CSSSC). According to Larry both roles have educated him about the precarious situation of runners, walkers and cyclists in Jacksonville and it was discussions with fellow committee members that planted the seed for JTC to support GWJax.

Larry says, “Having places for people to safely run, walk and cycle off-street is so needed in Jacksonville, and the Emerald Trail will provide that throughout the urban core, especially in under-served neighborhoods. But just as important, the Trail will link different parts of the City to help us create connections with people from neighborhoods other than where we live.”

Larry also is a board member of Marathon High, an organization that challenges at-risk teens in NE Florida to run a 13.1 mile half-marathon while experiencing the benefits of goal setting, self-respect, leadership, teamwork, improved health and achievement.

Along with his wife Judy, Larry volunteers to help with transportation for four-legged friends too. The couple spends many weekends transporting rescued dogs to foster homes and from foster to permanent homes along the east coast from Florida to the Carolinas and beyond.

“I was lucky enough to find great satisfaction in my professional life and now that I am retired, I can devote time to things that make me feel good and to causes that are important to me like helping people get active and connect in a way that makes their lives better,” he adds.

GWJax can’t thank you enough Larry! You are making all of our lives better through your efforts and your example.